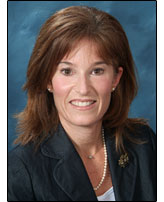 Jill Raffee has over 25 years of experience in all aspects of litigation. Her primary focus has been real estate litigation, including commercial landlord tenant disputes and breach of lease actions, construction defects, mechanics lien claims, judicial foreclosures and homeowner association disputes. Her business litigation experience includes wrongful termination actions in the employment context, franchisor/ffranchisee disputes, and general business disputes, including breach of contract and collection matters. She has represented both small and large businesses, business owners, and individuals.

When she is not practicing law, Ms. Raffee enjoys spending time with her three kids, traveling, and skiing at Mammoth Lakes, California.

Misappropriation of Trade Secrets. Represented several employees in an action filed by their former employer for misappropriation of trade secrets. The employer sought over $500,000 in damages. The matter culminated in a 3-week jury trial with a verdict rendered in favor of my clients.

Fraud, Breach of Contract. Represented hard money lenders in an action to foreclose against real property. The borrower filed a cross-complaint for fraud and breach of contract. The matter culminated in a two-week jury trial in the Los Angeles Superior Court. The parties settled prior to closing arguments. The lenders recovered the real property security. (In addition, a consolidated legal malpractice action was settled one week prior to trial with a mid, six-figure settlement in favor of the lenders.)

Wrongful Termination. Represented the employer and its president against claims of wrongful termination and sexual harassment. The action went to trial in San Diego County. The judge rendered a decision in favor of the defense on all claims.

Securities Fraud. Represented the plaintiff in an action against a sales firm who defrauded plaintiff of more than $200,000. Judgment was entered in favor of the plaintiff following a ruling in our favor on a motion for summary judgment.

Foreclosure of a Mechanic’s Lien. Represented the real property owner in an action brought by its former contractor to foreclose a mechanic’s lien. Following a two-day bench trial, the Court ruled in favor of the Property Owner on a motion for non-suit.

Breach of Lease Action. Represented the former tenant in a breach of lease action brought by the landlord. The landlord was seeking almost $200,000 in damages. Following a 5-day bench trial, the tenant prevailed on its Statutory 998 Offer.

Construction Defect. Represented a property owner in an action against its roofing contractor for a defective foam roofing system. Following a nine-day jury trial, a verdict was rendered in favor of the property owner for over $640,000 in repair costs, plus an additional $150,000 in attorney’s fees.

Interpretation of a Commercial Lease. Represented the Landlord in an arbitration proceeding to determine the lease language regarding the manner in which rents would be calculated on an annual basis. The matter was heard over the course of a 5-day arbitration. Ultimately, the Arbitrator found in favor of the Landlord. The resolution of the dispute in favor of the Landlord resulted in an additional $1,000,000 in rents over the remaining term of the Lease.

Franchisee v. Franchisor (Fraud). Represented franchisees in a 3-day arbitration involving allegations of misrepresentation and violations of the Cal. Franchise Investment Law (Cal. Corp. Code 31300, et set) following claimants’ purchase of a franchise system. The Arbitrator found in favor of the franchisees on their fraud claim and awarded $785,000 in compensatory and punitive damages against Respondents.